Theme: NUMBERS GAME.  The theme answers can be parsed by splitting off the last few letters, which in each case then constitute the spelt out name of a number.  These also appear in numerical order, which is a nice, elegant touch.  For some of them the pronunciation changes.  Fun theme for me, since I get a kick out of alternate parsings.

17 A. Does well at the casino? : BREAKS EVEN.   Since the house has a persistent advantage, one who BREAKS EVEN actually is doing well.  SEVEN is considered by some to be a lucky number.  So parsing this letter grouping to split off the number SEVEN might actually be a lucky BREAK.

25 A. Cereal box factoid : NET WEIGHT.   This is the WEIGHT of the contents of the box.  The weight of the container is called the tare, and added together they give you the total WEIGHT.  Maybe you'll get EIGHT servings, and eating them might affect your WEIGHT.

50 A. Opera house level : MEZZANINE.  This traces back to the Latin word for median, and refers to a building level between two floors, in this case the main auditorium and the balcony.  NINE is the number of either ladies dancing on the stage, or the Nazgul, though I'm not sure how that is relevant.

60 A. Bullied : BROW-BEATEN.  Influenced by verbal or psychological intimidation and abuse, rather than physical harm, though that might be threatened.   This can happen because the TEN Commandments did not include "Thou Salt Not BROW BEAT."

And the unifier -- 37 A. Concert finale ... and what 17-, 25-, 50- and 60-Across have in common: CLOSING NUMBER.  That's the last song of the performance, and points us to the tail end of each theme answer.  Having the unifier in the middle makes for nice symmetry, but can give away too much too soon, if you're filling in with top down sequence.

Hi gang, JazzBumba on the job, though I'm not much of a numerologist.  Let's go check out the words and letters.  That's more my speed.


1. Unlike this clue, obviously : LAST.  So, the LAST really will be first - at least in the context of this grid.

5. Driving force? : MOTOR.  Usually this phrase is figurative, but here, it is literal, since a MOTOR provides the driving force for a vehicle or some other kind of machine.  So why the question mark?

10. Bar regulars, and then some : SOTS.  Habitual drunkards.  The word originates in medieval Latin, coming to us via late Old English, where it referred to a foolish person.  The current meaning dates for the late 16th century.

14. Bible book before Romans : ACTS. Of The Apostles.

20. URL ending : COM.  For a commercial enterprise. Others are EDU for schools and ORG for organizations.

21. Bridge call : AHOY.   The bridge of a ship, not something uttered in a card game.

33. Etiquette expert Baldrige who was Jackie Kennedy's social secretary : LETITIA. [1926-2012]  Author of 20 books and a newspaper column who also ran her own PR firm.

41. Comes back with : REPLIES.  Not RETORTS, I discovered.

48. Ready for the piano recital : IN TUNE.  I could go on and on about this, but the comma of Pythagorus is too difficult to explain.

68. Archer of myth : EROS. Bringer of love.  This is why it's called arrowticism.

Protects your clothes from blood and chemicals

3. Recent medical research subject : STEM CELL.  An undifferentiated cell that is capable of developing into any of a variety of specific cell types.

7. "Tradition" singer : TEVYE.  From Fiddler On The Roof.

He does have quite a bit of help

26. Strong string : TWINE.  From the same root as two and twin, a strong string made from two or more strands twisted together.

29. Add sneakily : SLIP IN.  As when late for a meeting, hoping to not be noticed.

35. "In Here, It's Always Friday" letters : TGI.  From the Restaurant chain TGI Friday's.

38. Enterprise choice : SEDAN.   Rental car, having nothing to do with Star Trek. 45. Everycity, USA : PEORIA.   This idea originated in one of Horatio Alger's plays.

46. Tenochtitlán natives : AZTECS.   They dominated meso-America in the 14th through 16th centuries and are noted for the practice of human sacrifice.

49. Where to see IBM and JNJ : NYSE.   Stock symbols on the New York Stock Exchange.

53. Astronomer Hubble : EDWIN. [1889 - 1953]  American astronomer who showed that the universe is expanding, and provided evidence that far off objects considered to be nebulae were actually galaxies.

62. More than impress : AWE.  A reaction of wonder to something grand, sublime or powerful.

And thus ends this little number.  Hope you enjoyed it.  Mind your traditions and go in peace, my friends. 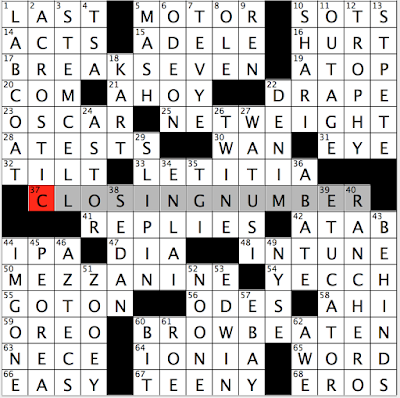 Theme: GRAVITY, MAGNETISM and FRICTION, or MASS x ACCELERATION.  The 2nd word of common two-word phrases combines with the word FORCE to indicate a body of people organized for a particular activity.   I FORCED those physics related ideas on you, but will not apologize.

17. *Project with many obstacles : UPHILL TASK.  Something difficult to accomplish.  I suppose the referent here is Sisyphus.  You might need some helpers to accomplish that thing - hence a TASK FORCE, an ad hoc group devoted to completing a specific assignment.

22. *E! talk show focused on celebrity outfits : FASHION POLICE.   Clothing critics, and a TV show based on their commentary about the dress modes of celebrities.  It's amazing how much time some people have on their hands.  Police FORCES are units of government charged with the prevention or detection of crime and the maintenance of public order.

47. *Britannica, e.g. : REFERENCE WORK.  A book or other repository of useful information.  Many years ago I contributed a chapter on automotive plastics and elastomers to such a book.  The WORK FORCE refers to people engaged in or available as labor within some geographic unit, industry, or business.

55. Team up ... or, literally, what the last words of the answers to starred clues can do : JOIN FORCES.  As indicated in 17 A,  to get together for some purpose.  The target words JOIN with FORCE to fulfill the theme concept.

Hi, Gang, JazzBumpa here, getting together with you to make our way through today's puzzle.  Let's have at it.

1. One of seven in "Jabberwocky" : STANZA.   A nonsense poem include in Lewis Carroll's action-adventure novel Though The Looking Glass.  You can read all 7 quatrains here.

7. Shabbat celebrant : JEW.   Shabbat is the biblical day of rest, and the source of the English word sabbath.  Rosh Hashana, the JEWish New Year celebration was from Sunday through Tuesday, so l'shana tova to all.

10. "Baby __": 2008 Fey/Poehler comedy : MAMA.   A conflict comedy involving an adoptive mother and the surrogate mother she hires.  That's more than I know about it.

16. Disembarked : ALIT.  To descend, land or dismount, in past tense form.

21. Vacation abode : CABIN.  If you can't afford a resort or luxury hotel.

28. Neighbor of Venezuela : GUYANA.  A small, English-speaking country on the north coast of South America, nestled among Venezuela, Surinam, Brazil and the Atlantic Ocean, but culturally connected to the Caribbean Islands.

29. Discriminatory, as in hiring : SEXIST.  One of several possible discrimination types.

32. Pet adoption org. : SPCA. Society for the Prevention of Cruelty to Animals.

33. Deg. for a suit : MBA.  Masters of Business Administration.  I have one, but never qualified as a suit.

36. Annexation : SEIZURE.  Taking something by FORCE.

43. Went (on) monotonously : DRONED.  Spoke at length in a boring manner.

44. Monotony : TEDIUM.  Possibly the result of the previous.

52. Cutting : AXING.  In my 7 decades of existence on this planet, I have never heard anyone use the word AX as a verb.

53. Leaderless : TIED.  This is tricky.  With the score TIED, neither competing team is in the lead.

54. Strengthen : GIRD.   This is not quite right.  To gird is to encircle, or secure with a belt or a sash.  You can kind of see where the error comes from.

63. Poker challenge : I RAISE.  This increases the size of an existing bet in any round.  Other players must match the total bet or fold.

64. Academic leader in NBC's "Community" : DEAN.   A sit-com with an ensemble cast based on life and experiences in a fictional small junior college town in Colorado.

65. Author Kesey : KEN. [1935-2001]  Counter-culture figure, experimental drug user and author of the novel One Flew Over the Cuckoo's Nest.

66. Kind of tax : ESTATE.  A tax levied on inheritances totaling more than $5.45 million in value.

2. It often comes to those who wait : TIP.  For the restaurant wait staff.  Nice misdirection.

4. Rapa __: Easter Island : NUI.  This name refers to the island itself, the Polynesian inhabitants of the island, and the language that they speak.

7. Like Cain, of Abel : JEALOUS.  The adjectival form of a destructive emotion relating to desire about someone else's position, possessions, or relationships.

8. Leading characters in "Mork & Mindy"? : EMS.  Characters, as in the repeated alphabet letter beginning the two subject words.  I am deeply annoyed by this type of self-referential clue.

11. Cover story : ALIBI.   A claim that you were not at a crime scene when the event took place

12. Copycat : MIMIC.  One who lacks originality in thought and action.

18. Course where tangents are relevant : TRIG.   No indication that trigonometry should be abbreviated? This is not the sort of tangent off upon which one may go rambling, but rather the mathematic function that is equal to the ratio of the lengths of the sides opposite and adjacent to an angle in a right triangle.

If you're into that sort of a thing

23. "Master of None" star __ Ansari : AZIZ.  He also created and writes this Netflix series, the G-Man tells me.

30. *High-speed skiing event, familiarly : SUPER G.   Set on a down hill course with widely set gates, with more turns than the down hill event, and greater speed than the giant slalom.

31. Discipline : TRADE.   The only sense I can make of this is that one definition of "discipline" is "a branch of knowledge," and a trade is a job category requiring skills and training, so there is that kind of a connection.  Still seems like a stretch.  Do you think of plumbing as a discipline?

33. Capital of Belarus : MINSK.  This city has existed for over 1000 years and now has a population over 2 million.   Belarus is located east of Poland and south of Lithuania and Latvia.

45. Lo __: noodle dish : MEIN.   Mein refers to noodles made from wheat flour.  Maybe someone who know more about it should elaborate.

48. Forced absence : EXILE.   An order to go away and stay away, banishment, as punishment for some offense.

50. Cellphone self-pic of a group, slangily : WEFIE.  Evidently the collective equivalent of a selfie.  Who knew?

59. Inexact fig. : ESTimate.  An approximation that should be better than a guess.

Well, that ends this little get together.  I had my nits, but overall - not bad. 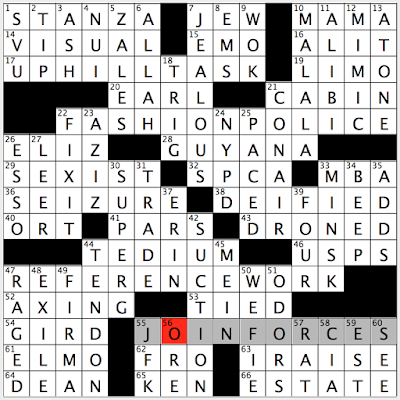