Theme: SCHOOL DAYS.  Various activities that school children may be involved in are indicated by the clues with asterisks.

18 A. *Annual kids' competition aired by ESPN : SPELLING BEE.  A contest to see who can correctly spell obscure words nobody will ever see or hear again.  In the class room version, I hope the target words are more useful.


24 A. *Excursion that may require permission slips : FIELD TRIP.  Visit to a dairy farm, fire station, or some other location that might be of educational interest.  The permission slip allows the teacher and helpers to take the students away from school premisses.


37. *Evacuation exercise : FIRE DRILL.  A practice run for leaving the building in a safe and orderly fashion, so that all occupants can be accounted for.  We had these where I worked, with several thousand people gathering in a number of assigned locations.  As department safety coordinator, I made sure everyone participated.

50 A. *Year-end hurdle : FINAL EXAM.  Year being the school year, not the calendar year.  The last test of acquired knowledge before moving on - or not.

And, the unifier -- 57A. Group lawsuit ... and what each answer to a starred clue is? : CLASS ACTION.  In the lawsuit, a group of people with a common complaint join together to take legal ACTION against some entity. In the CLASS room, it's an activity in which the students participate.

Hi, Gang.  JazzBumpa here for todays lesson. Pretty straight-forward theme - all of these ACTIONS clearly relate to things that students and teachers might be doing, though a couple of them can also occur in other contexts.  You'd almost think that the idea came from someone with inside-the-classroom experience! So - let's put on our thinking caps and see what we can learn.

1. Place for fuzzy navels : BAR.  This concoction of orange juice and peach schnapps [or many other potential ingredients] might be served in a tavern.

14. Whopper, but not a Big Mac : LIE.   Deliberately untruthful statement of some magnitude, not a large hamburger sandwich.

15. Reconciled : MADE UP.  I thought that they had gotten back together, but it was just a story somebody MADE UP. { I loves me the English language!}

17. Safari find : URL.  Safari is the browser on Apple computers.

20. Kazan who directed Marlon in his first Oscar role : ELIA.  This was Mr. Brando's 4th best actor nomination.  Can you name this 1954 film?  It was also the big screen debut of Eva Marie Saint.

22. Crème de la crème : ELITE.  The ones who are best at something, like ELITE athletes or musicians.

30. Airfield fixtures : TOWERS.  The better to see with.

32. Reader at Mass : LECTOR.  One who reads a scriptural passage as part of a church service.

36. Pigs out (on), briefly : OD'S.  Over-Doses.  Trivializing a term that otherwise relates to a serious public health problem.

39. Sergeant's address : SIR.  As the Sergeant would be addressed by his underlings, or would address her/his superior officers.

41. Balkan first-timer in the 2016 Olympics : KOSOVO.  Over Serbia's protest, they sent 8 athletes who competed in five events, and took home one gold medal, won by Majlinda Kelmendi in judo.

49. What might make a Cardinal an Oriole : TRADE.  From a National League team to one in the American League.  You knew there had to be some baseball in here somewhere.  A quick google search did not reveal any player-for-player trades between these teams in recent years.

54. Maine college town : ORONO.  Home of the University of Maine.  But why is there never any love for ORONO, Minnesota, in Hennepin County on the north shore of Lake Minnetonka?

61. Homeric outburst : D'OH.  Simpson, not the author of The Iliad.

1. Much sushi- and sashimi-grade tuna : BLUEFIN.  Several species of tuna in the genus Thonnus, found in many places around the world.

3. Take over for : RELIEVE.  As a baseball pitcher, perhaps.

6. Like __ in the headlights : A DEER.  Refers to someone with a glazed over expression, or frozen into inactivity by fear, panic or confusion.

9. Shish kebab holder : SPIT.  A rod or stick upon which the meat is skewered.

10. __ rule : GAG.  A imposed prohibition to speak about a specified topic.

Where birds meet, greet and eat

19. Fiddling emperor : NERO.   Nerō Claudius Caesar Augustus Germanicus [37-68 A.D.], the last Roman emperor of the Julio-Claudian dynasty, from 54-68 A.D.  There is much good and bad to be said abut him.  But he certainly did not fiddle, for that instrument would not be invented for another 900 years.  Rumor had it that he sang and/or played the lyre while Rome burned in July of 64 , but he was out of town at the time.  He organized and participated in relief efforts, and made a new urban plan, with wider roads and more widely spaced brick houses.  But he was scapegoated for the fire, and deflected blame on to Christians, who were then brutally tortured and murdered.  Definitely not this guy.

26. Sexy dance moves : TWERKS.  Sexy or downright obscene?  You be the judge.

43. Gray area? : ANATOMY.  Refers to a medical text book of the human body by Henry Gray with illustrations by Henry Vandyke Carter, first published in 1858. The TV medical drama, now in it's 13th season, is GREY'S ANATOMY.

46. Some summer births : LEOs.  The 5th Zodiac sign, in the fire group, symbolized by the Lion. 48. Triangle side : LEG.  All triangles have legs.  Some legs have triangles. 50. Prepare to shoot with a Canon : FOCUS.  Camera, not heavy artillery.

55. Major Hindu deity : RAMA.  The 7th avatar of Vishnu, the Supreme Being in some Hindu traditions.

59. Bullring cry : OLE.  An interjection used as a shout of encouragement or approval.

OK, kids - CLASS dismissed.  Our own C.C. and Gary gave us a great lesson plan today.  Hope you found it enlightening.  Now go do your homework.

P.S.  In case you haven't G-spotted that Eva Marie Saint movie cited above, its On The Waterfront. 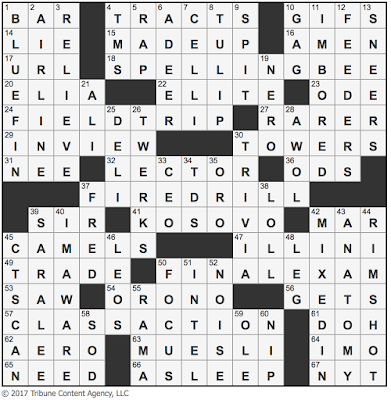