Our protocol through December will be to write haiku or senryu inspired by the music of Swiss musician Adrian von Ziegler.   Today's entry is Kanpai, inspired by Japanese festivals.

I've been absent a lot these last few weeks, and will be in and out for the next two more at least.

I haven't forgotten you, though.


Today's tan renga challenge to add a second [7-7] stanza to this haiku.

Theme:  Mr. Mostel, or Dash it all, or Nothing, really.

So many pictures, so hard to chose

17 A. Line on an envelope : CITY STATE AND ZIP.  Part of an address, but not Mr. Lincoln's at Gettysburg.

23 A. Pago Pago's land : AMERICAN SAMOA.  City on an island; also the Capital.

Hi gang, JzB here, totally in awe of this seemingly nothing theme, and its execution.  Until the unifier, I was clueless.

Here is today's theme song, from the 1946 Disney movie, Song of the South.


the Buddha himself
did not start enlightened
he walked the path

Speaking of paths; check this out.

We were visiting relatives in Florida last week, and drove home over the week end.  Sunday was a bad weather day, and we stayed ahead of the worst of it for most of our trip. In the afternoon, we stopped in Toledo to see my mom.  That's when the bad weather hit, and we decided to wait it out, rather then drive through it.

Then this happened, as we found out yesterday. 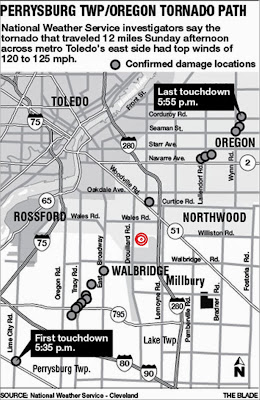 The picture, from yesterday's [Tuesday, 11/19/13] Toledo Blade, shows the path of a tornado that swept across the area on Sunday. I've added a red bull's eye, showing the approximate location of my mother's MOBILE HOME, where mom, my sister, my lovely wife and I were when the tornado came through.

The tornado literally leap-frogged two adjacent mobile home parks at approx. 5:45 p.m. and passed right over our heads. We didn't even know it had happened.

We had already driven about 450 miles that day, only to come to rest in the path of a destructive twister.

On a more positive note, Sis made us a nice chicken paprikas.

My internet is down due to the storm.

Unlike many thousands, though, we do have power.

No posting or visits until service is restored.

I'm delighted to see one of my haiku in the tan renga challenge.

This one actually pleases me quite a bit. 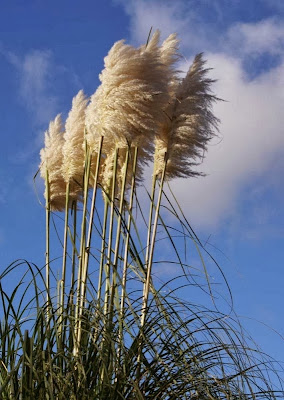 I'll be around to check all your completions in a day or so.

Thanks for playing along.

Bringing my old friends back into it.

[Sorry about the formatting oddities.  I'm not at my own computer.]

Today's starting haiku is from Sara McNulty at Purple in Portland. 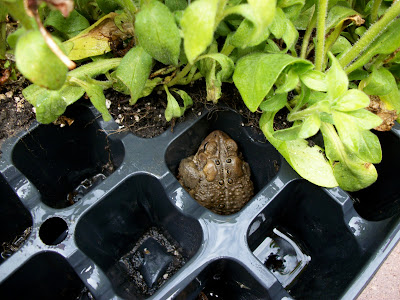 
Mark's haiku reminded me of this this incident.

Today's challenge it to construct a 2nd stanza of two lines in 7 - 7 form to complete Mark's haiku.

I originally intended to write "bouncing."  "Bounding" is not only a typo, but an improvement!

You just can't throw away that kind of good luck.