Theme:  The RAT's nest.  Each theme answer has the word RAT comfortably snuggled deep inside.

24 A. Subjected to harsh criticism : UNDER ATTACK.  Verbal attack. Topical, but let's not go there.

51 A. Many a Sports Illustrated cover figure : STAR ATHLETE.  Well sure, sports magazine, star athletes - a perfect fit.  Not always how it works out, though.  I was unable to locate an SI cover of DARA TORRES.  So this will have to suffice. Note that the letters R, A and T are broken across two words in each answer, and, as a nice touch, the break point alternates between after and before the A.

Hi, gang, it's JzB, who actually has been a lab RAT, of a sort, in the distant past.  Let's put on our lab jackets and see if we can find any other RATS in the labyrinth that C. C. has set out for us today.

8. Very dangerous : TOXIC.   Poisonous - as related to certain substances or persons in relationships.

14. Have to have : NEED.  In my marketing class many years ago, I learned that advertisers do not distinguish between wants and needs.  My protest that I need transportation, but want a Porsche Carrera went unheeded.

16. Cuban dance : RUMBA.  The term has long since lost whatever specificity it may once have had, and is applied to many styles of dance and music with a latin flair.  Here is a modern example from Mexico.

22. Exodus peak : SINAI.  The mountain where Moses received the 10 Commandments.  It took no time at all for them to get broken.

27. Belgian detective played by Ustinov, Welles, Finney and others : POIROT.   Hercule, an Agatha Christie character who appeared in 33 novels, over 50 short stories and one play between 1920 and 1975.

28. Knight in shining armor : SAVIOR.  If being saved from a fire-breathing dragon counts as salvation.

31. Nobelist Bohr : NIELS.  He received his prize in 1922 for contribution to the understanding of quantum theory.  Some of Einstein's friends thought that Albert was interesting, but NIELS was a Bohr.

41. Battery-free calculators : ABACI.  Not only that, they're also digital!  A competent operator is also lightning quick.

64. "Game of Thrones," for one : SAGA.  A long story of heroic achievement.  GoT is certainly long.  Whether anyone lives long enough to actually achieve heroically is very much up in the air [as are the dragons.]

2. French city on the Rhone : AVIGNON.

10. Satellite service for road trips : XM RADIO.  They might also play it there.

12. Furniture wheel : CASTER.  Mounted in such a way that it can roll in any direction.

32. Stretch in history books : ERA. A time period notable for some characteristic. 45. Volunteer, in a way : ENLIST.  In the armed forces or other organization.

46. Bible book with 150 poems : PSALMS.  I recently had a chance to play this beautiful Russian Hymn based on psalm 74.

49. Muscles strengthened by lunges : GLUTEI.  Is this a mini-theme, or am I getting a little behind?

But it's in Italian

That wraps another Wednesday.  C. C. gave a fine puzzle to while away a few well-spent moments. Hope you made it through OK.  Now - who moved my cheese? 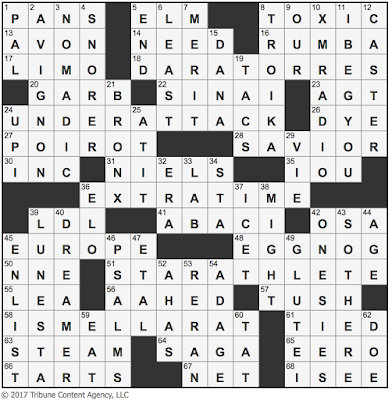