Theme: Something fishy, right up front.  Each theme answer starts with the name of well known fish.

Let us start with the unifier, to make everything clear.

40 D. Ingredient in some Asian soup, or, literally, what each answer to a starred clue has : FISH HEAD.  So, the named FISH is the HEAD, or beginning of each theme fill.   This gives us our theme song.

17 A. *Droopy-eared dog : BASSET HOUND.   The BASSET HOUND has the awkward combination of long ears and short legs, and a sense of smell second only to the blood hound.  It's low slung contour is indicated by by the French word BASSET, meaning "rather low."  BASS are any of several fresh or salt water varieties, similar to perch, belonging to the order perciformes.  The name BASS is derived from a Middle English word for perch.

25 A. *Testimony preceder : SOLEMN OATH.  This involves an appeal to a deity or revered person or symbol to guarantee that oath speaker is making an honest testimony or promise.  SOLE are several varieties of flat fish.

38 A. *Garage alternative : CARPORT.  A more or less protective structure, with a roof but fewer than four walls.  CARP are several species of oily fresh water fish native to Europe and Asia.


52 A. *Common cause of food poisoning : SALMONELLA.  This is a bacterium that can be found in contaminated food.  It is named for Daniel Salmon who was leading the team in the U.S. Dept. of Agriculture that discovered the pathogen.  SALMON fish are born in fresh water.  Some varieties migrate to the sea, then return to where they originated to spawn.

61 A. *Garment with a fitted waist and flared bottom : SKATER DRESS. 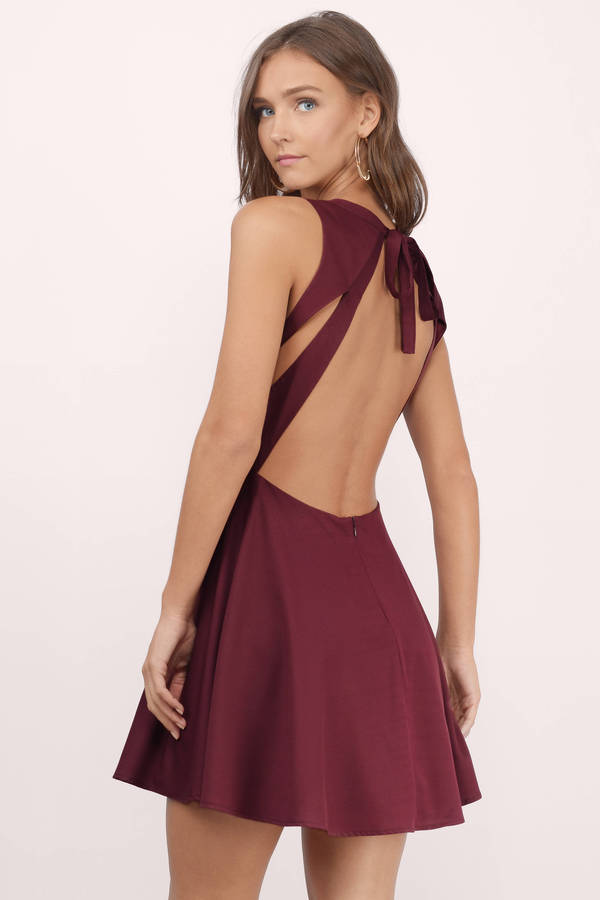 Pair with stilettos and a clutch

The SKATE fish are similar, but not identical, to rays.

Hi gang, an ailing Jazzbumpa here to guide you through this aquatic offering from our fearless leader. Despite the theme, you'll see there is nothing fishy going on here.

6. Emotional states : MOODS.  They can be good or bad.

11. Big name in home security : ADT.   The largest security company in the U.S. and Canada with over 6.5 million customers.

20. Home buyer's choice : CONDO.  A private residence owned by an individual or family in a building or community with multiple units.

30. Present mo. : DEC.  The present month is April; the month for presents is December, which is in the future.

44. Like King Kong : SIMIAN.  Referring to apes and monkeys.  Also a clecho. 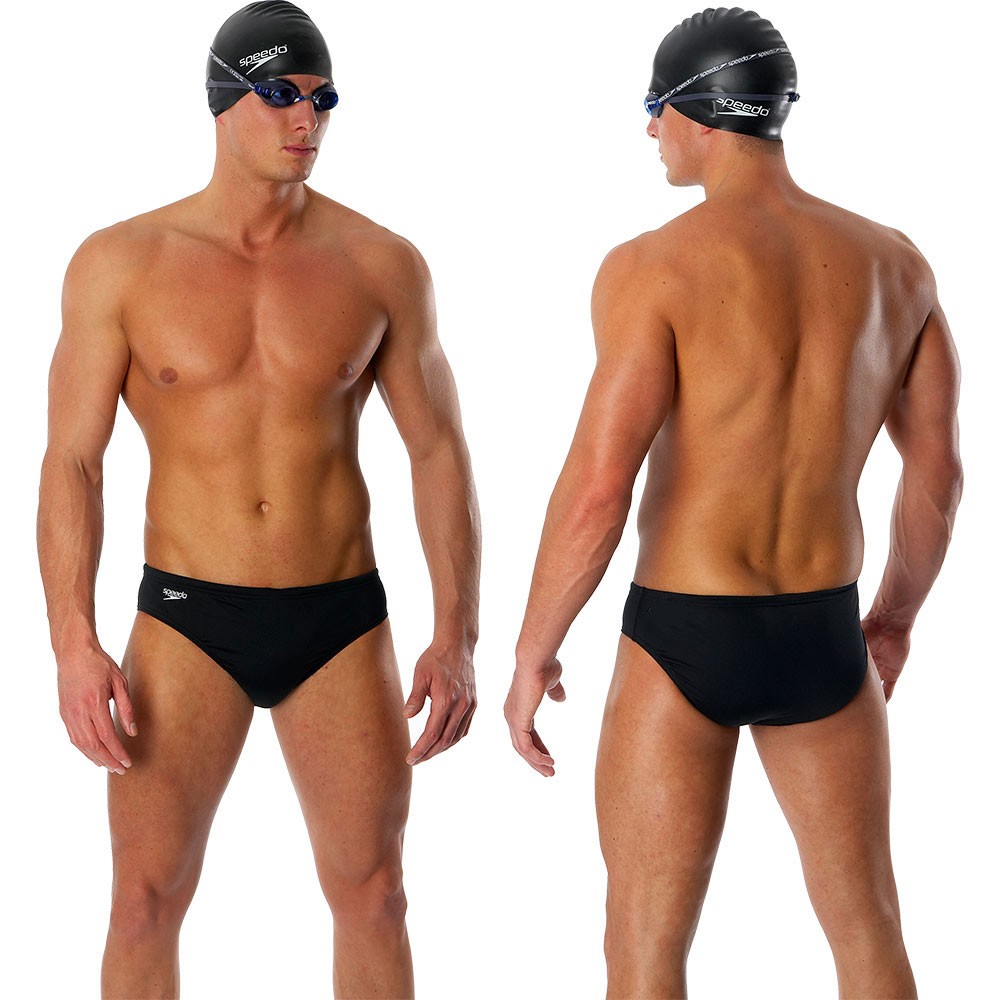 70. Polishing targets : NAILS.  On your fingers and toes.

2. Santa __ Mountains : ANA.   A short range extending for about 61 miles southeast of the Los Angeles basin.

3. Twice-baked cookies : BISCOTTI. They are oblong, dry, crunchy, and intended for dipping - traditionally in Vin Santo, a style of Italian desert wine of variable sweetness.

8. Christian sch. in Tulsa : ORU.  Founded by its eponym in 1965, Oral Roberts University has a high academic standing and a checkered administrative past.

10. It often has four doors : SEDAN.  An automobile with front and rear seating suitable for adults, and a cargo compartment, typically in the rear.

11. Some kitchen appliances : AMANAS.  The company manufactures a variety of kitchen and household appliances.

18. Pts. by Vikings : TDS.  Touch Downs scored by a professional football team from Minnesota.  Do we have any RABID fans?

22. Irrelevant : MOOT.  This is the secondary meaning.  The primary meaning is "open to dispute."

23. Critter rescue org. : SPCA.  Society for the Prevention of Cruelty to Animals.

24. Big name in business jets : LEAR.   The LEARJET company was founded in the 1950's by William Powell LEAR.

33. Golfer's four, often : PAR.  The number of strokes needed by a first class player to complete the hole.  Cf 15A.

36. Handle on many elevators : OTIS.   "Handle" here denoting the name.

39. Bento box staple : RICE.  A bento is a single-portion take out or home made meal common in Japanese cuisine.  It usually contains rice along with meat or fish and cooked vegetables.  The actual box can be anything from a cheap disposable to hand-crafted laquerware.

42. "Only Time" songwriter : ENYA.  It seems that Eithne Pádraigín Ní Bhraonáin shows up at least half the time when I blog.

46. In itself : AS SUCH.  Exactly as described or suggested.

47. Devours eagerly : LAPS UP.  To accept something with great enthusiasm.

48. Responds in court : PLEADS.  Presents or argues for a position.

That wraps it up - a fine puzzle, indeed.  My only nit is the glaring lack of a baseball reference. What's up with that? 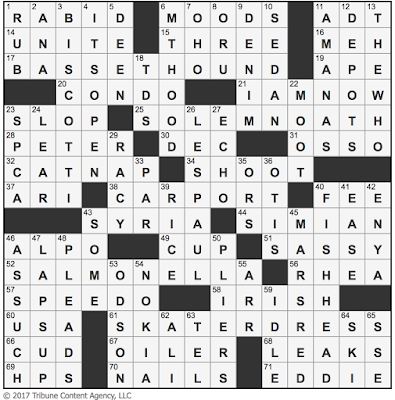 Theme: THREE LITTLE LETTERS.  Each theme entry begins with a three letter combination that is repeated, in order, at the end of the entry.  The closest I could come to a theme song is Three Little Words, Eight Little Letters.  Sometimes you just have to make do.  Take three minutes to give it a listen.

Hi Gang, JzB here, as you have probably already guessed.  The Three Little words in the song are: "I love you." A bit of trivia I picked up researching this post is that it was also the name of a 1950 movie about Bert Kalmar and Harry Ruby. the guys who wrote the song. Ironically, they didn't like each other very much.  My last blog also involved letters in threes.  Maybe this is my new assignment.  Let's delve into the theme.

17 A. *Process of electron gain or loss : IONIZATION.  Chemistry or Physics?  Either way, I get a charge out of it.  Yes, I'm positive!

24 A. *Beneficial substance in berries : ANTIOXIDANT.  Chemistry or Biology?  Oxidation is a process that might or might not involve IONIZATION.  Either way, an ANTIOXIDANT protects something else from being oxidized by getting oxidized itself.  Greater love no molecule hath!

34 A. *Eating : INGESTING.  Taking something, such as an ANTIOXIDANT into the body, by swallowing or absorption.  Yet another physical process.

48. A *London subway system, with "the" : UNDERGROUND.   Here we have a place about which I know very little.  Maybe Steve can help.  It is the main setting of Neil Gaiman's strange novel Neverwhere, in which people lost from normal society find an existence in an alternate reality.

57 A. Each answer to a starred clue begins and ends with identical ones : THREESOMES.  A group of three people or things doing something together.  What they are doing here is acting as bookends.  What else can we find?

6. Lay eyes on : ESPY.  This word, ultimately of germanic origin, comes to us via Old French.  I remember my college German Professor remarking that Old French was Latin spoken badly by Germans.  Compare to "spy."

10. Judge's setting : BAIL.  Not a location, but a quantity of money set by the judge, paid to assure that an accused person does not run off.

16. Insulate, as a jacket : LINE.  Install a layer of lining for added warmth.

20. Cereal with lemony lemon and orangey orange flavors : TRIX.  As I recall, they're for kids.

22. Bryn Mawr undergrads : WOMEN.  This is a women's liberal arts college named for the Pennsylvania town in which it is located.  The name means "Large hill" in Welsh.

45. Asian rice porridge : CONGEE.  Never heard of it.  Is it congealed?

55. Cruciverbalist Reagle of "Wordplay" : MERL.   We all knew this - right?  What you might not have known is that he retained all rights to his puzzles, and was thus able to make a living exclusively from puzzle construction.   Sadly, he passed away in August, 2015 from a sudden onset of pancreatitis.

63. Start of a preschool song : ABCD.  Four little letters?  Probably not.  Nor this one, I'm guessing.

6. Absorb the loss : EAT IT.  More American slang, for taking a financial loss.

10. Diabetic's concern : BLOOD SUGAR.  The amount of glucose present in the blood stream.  Values outside the normal range can indicate a medical condition.

11. High behind a front, e.g. : AIR MASS.  A body of air with horizontally uniform temperature, humidity and pressure.

12. Holy smoke : INCENSE.  A substance burned for it's sweet aroma.  As the clue indicates, it is often associated with solemn religious ceremonies.

13. Campsite shelters : LEAN-TOS.    Simple structures composed of a slanted roof-wall, with or without 2 side walls.  The fourth side is open, generally oriented away from the prevailing winds.

18. Former Education secretary Duncan : ARNE.   Does anybody remember this man who served from 2009 through 2015?  Does anyone know for sure which name goes first or last?  It goes like this: ARNE Duncan.

27. Capital of Barbados : BRIDGETOWN.  Located at the southwest corner of this island nation.  I had no clear idea of where Barbados is.  It is the eastward-most of any island in that part of the world. 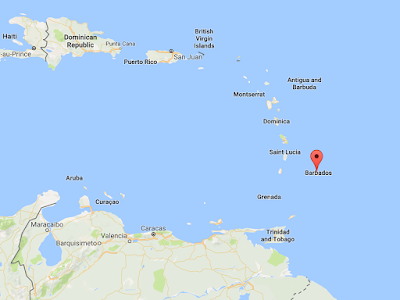 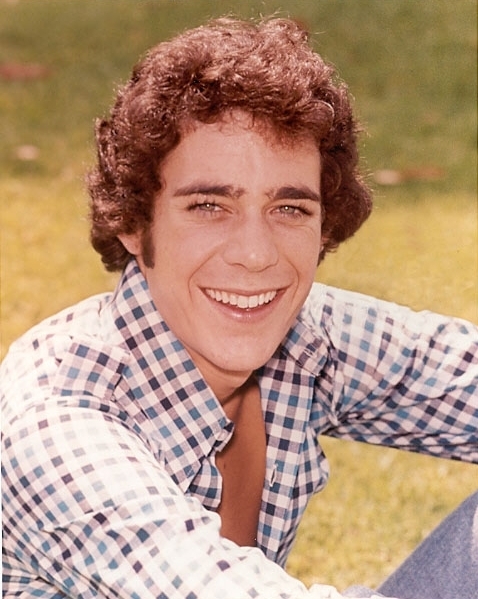 37. Most severe : ACUTEST.  In this sense, experienced to an extreme degree.   Is this word the awkwardest? 39. Ambien, vis-à-vis sleep : INDUCER.  It aids in falling asleep, but not in staying there.  But still can cause residual drowsiness the following morning.

43. "Into Thin Air" peak : EVEREST.  Book and movie of the same name that attempt to recreate the disastrous events of a climb that occurred on May 10, 1966.

47. Green Gables girl : ANNE.  An 11-year-old orphan girl mistakenly sent to Matthew and Marilla Cuthbert, a brother and sister team who were expecting a boy to help on their Prince Edward Island Farm, in Lucy Montgomery's 1908 novel.  The story has been adapted many times into movies and plays.

55. Bit of chess action : MOVE.  Almost - but not quite - always involves a single piece at a time.

That wraps up another Wednesday.  Hope all your letters are lining up. 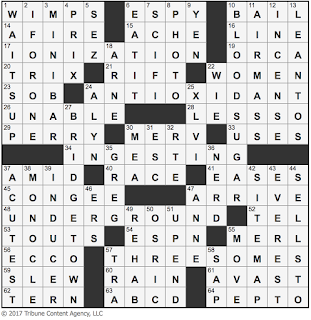