Two weeks ago we took a color tour in northern Michigan.  It was a bit early for peak color, and certainly before the leaf fall, but we had perfect weather.  Here is a view along Lake Charlevoix. 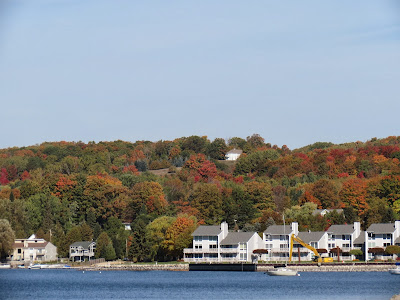 Is the pathetic fallacy appropriate to haiku and tan renga?  Maybe one of you knows.

If anyone is interested in knowing what sort of things I do when I'm not doing this, you can find some of it here, here, and here.

Theme: VERMILION INTERSECTIONS,  or WHERE REPUBLICANS AND COMMUNISTS MEET AND GREET. [I refuse to call this THE RED WEDDING!]  The starred clues refer to themed answers indicating various shades of red that cross in the grid, [I dare to report with no trace of embarrassment.]

21 A. *Small fruit first cultivated in Oregon : BING  CHERRY.  Wikipedia tells us, "The cultivar was created as a crossbred graft from the Black Republican cherry in 1875 by Oregon horticulturist Seth Lewelling and his Manchurian Chinese foreman Ah Bing, for whom the cultivar is named."

58 A. *Vin Scully will be its 2014 Grand Marshal : ROSE PARADE. This New Year's Day festival of equestrians, marching bands and flower-covered floats antedates the Rose Bowl football game by 12 years.  The latter was added in 1902 to help fund the former, which is now the province of the Honda motor car company. Leslie Ann Warren, shown here close to the other suspects - and tantalizingly close to a wardrobe malfunction - stepped in to play Miss Scarlet in the movie version of CLUE when director Johnathon Lynn's first choice, Carrie Fisher, went onto rehab four days before filming started.  Whether she had the DT's is unreported.

And the centrally located unifier:  41 A. Humanitarian symbol, and a hint to what happens where the answers to starred clues intersect : RED CROSS.

You can make a difference


Hi Gang, JazzBumpa here.  Our fearless leader has blended a colorful cocktail for us today, with an unusual 15 x 16 grid design, and intersecting horizontal and vertical entries long with a creative theme.   Other possibilities include beets, apples, catchup, Bob the Tomato, Rover, Erik the Viking, Lucille Ball and the Rouge River.  Let's see what else she has in store for us.

The challenge this time is to complete a haiku left unfinished by Basho in 1690.   The intense difficulty stems from the fact the the first two lines have no obvious connection - in fact it's hard to even relate them to each other in a coherent way.

The first line is so evocative of loss, or at least unfulfillment.  Is the wife on a trip, has she left the implied speaker, or died?  Has he never had a wife and wishes he did?  So many possibilities, and none of them happy.   I have a feeling there is something symbolic about the bamboo grass of line two that is outside of my knowledge base.  And grass diving - what does that even mean?

So - a tough challenge; but I'm taking it seriously.

My attempt at completion:

missing a wife
the bamboo grass dives under
her departing steps

I read in this a sense of loss,
a bit of melancholy and longing:
hence, my inspiration.

under the halloween moon
the fish scatter like scared crows           (JzB)

pull each other up
[better than codependence]
benefits for both 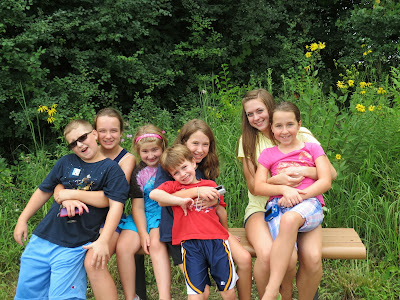 Seven of our Eleven Grandchildren

in our family
we are melanin challenged -
ivory skin tone

sweat lodge -
my only vision
is of the cool water

What you get from me:

Not something I've ever done, not am I likely to.  But that's where the thought took me.

The goal is to add the 3rd line to the first two extracted form an existing haiku.

Today's starter was written by Kristjaan a couple of years ago.