Theme:  Ate a picle, feeling sicle - now how about an icicle?  The fragment -ICLE is added as a suffix to four in-the-language phrases, yielding new, humorous constructions.

20 A. Bond portrayer Daniel's BuzzFeed piece? : CRAIG'S LISTICLE.  The referent is James Bond actor Daniel CRAIG, who also starred in the Jon Favreau SF/Western mashup Cowboys and Aliens. A LISTICLE is an internet article presented as a numbered or bullet point list.  Since Daniel also starred in the incomprehensible Dream House, his could be a rank-ordered filmography.

46 A. Ezine feature? : MODERN ARTICLE.  MODERN ART includes a variety of styles from the 19th century through the 1960's, including Bauhause, surrealism, impressionism, op art, etc.   A MODERN ARTICLE would be published in a modern venue like an Ezine, for sure.  But for my money, this entry is too close in surface meaning to the first one we encountered.

55 A. Beantown treat? : BOSTON POPSICLE.  Beantown is a common name for BOSTON, dating back to colonial times when local puritans typically had a Sunday meal of previously prepared beans and brown bread, to avoid cooking on the sabbath.  With Summer drawing nigh, a POPSICLE is an inviting treat that the Puritans would probably have considered sinful.

There's your theme, folks.  Hope you don't think its ICLE.

1. Observe Ramadan, in a way : FAST.   Ramadan is the 9th month of the Islamic calendar, during which the faithful avoid [among other things] eating food between dawn and dusk.

5. __ and terminer: criminal court : OYER.  From the Anglo-French meaning "to hear and to determine."

14. Scratch the surface? : ETCH.   Engrave a surface by any one of several means.

17. "Sharknado" actress Reid : TARA.  I never saw this movie, but it's generally considered to be pretty bad.

18. Banish to Hades, say : DOOM.   The modern meaning is to be relegated to some horrible fate.  The Old English meaning is closer to "judgment."

19. Like most tarantulas : HAIRY.  These are hairy spiders to which I will not link.

41. Sydney school : UNI.   Near as I can tell, this refers to the UNIversity of Sydney in Australia.  Maybe I'm missing something, but this entry seems to lack specificity.

42. Charlatan : FAKE.   An imposter - one who claims to be something he isn't, while typically on a quest for some type of personal gain.  Usage for this word peaked around 1940.

50. "Collages" novelist : NIN.   Unlike most of her other work, this is a dreamy, experimental novel with many characters wandering in space and time.

60. Real pip : BEAUT.  A Beauty - can be intended literally or sarcastically.

62. Online urban music magazine : VIBE.  Where one might read a LISTICLE or other MODERN ARTICLE. 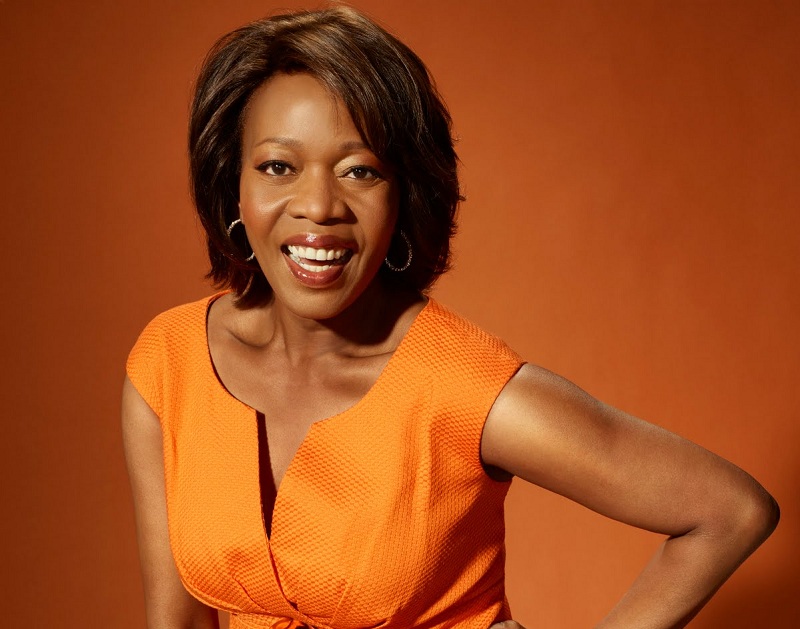 65. Molecule component : ATOM.  Made up of sub-atomic PARTICLES.

67. Help for the poor : ALMS.  From Old English, via late liturgical Latin, and ultimately tracing to Greek roots indicating both money and compassion.

2. Game company formerly named Syzygy : ATARI.  I did not know that.

4. Asian language with 44 consonants : THAI.  ODDS ARE that's more than I can pronounce.

6. Shoppe descriptor : YE OLDE.  Of course we all know that the "Ye" is really "The" with the initial consonant sound rendered by the rune "thorn" (Þ, þ)  rather than the digraph "Th."  The rune was often represented with a slanted slash coming from the right rather than the closed loop, hence the similar appearance to the modern letter "Y."

7. Weena's race, in "The Time Machine" : ELOI.  Occasionally, the other race - Morlocks - would eat them.  In the 1960 movie version, Weena was played by Yvette Mimieux.

8. What swish shots don't touch : RIMS.  A basketball shot that gets nothing but net.  Still only 2 points, but more pleasing to the eye and ear.

11. Bubble and churn : ROIL.  Agitate something physically, and by extension emotionally.  If one become red-faced dong this, it is known as a ROIL flush.

12. Green land : EIRE.  The Emerald Isle, notably not the location of the Emerald City.

13. Seinfeldesque : WRY.  A la the humor of the TV show about nothing.

29. Operational branch : ARM.  A subgroup dedicated to a particular purpose.

32. Wind down or wind up : END.   Slang terms "for bring to a close."  But a pitcher's wind up or winding up a spring-actuated mechanical device, such as the toy we will met shortly, gets things going.  One more reason to love the English language.

38. Jack-in-the-box flipper : LID.  Child's box-shaped toy with a crank used to start the action by winding up, and ends with a clown figure popping out through the lid.

39. Police blotter letters : Also Known As, indicating the use of an alias.

42. Fried corn cake : FRITTER.   Any of several deep-fried, batter coated items, such as fruit, vegetables, or even meat.

43. __ Domini : ANNO.   The Year of our Lord, presumably starting with the birth of Jesus Christ, indicating a dating system that originated in the early middle ages.  But somewhere along the line, there was a mistake.  Jesus was born during the reign of King Herod, who died in 4 B. C.

45. Treats, as a sprain : ICES.  Tin Man - note here an acceptable use for ice; to reduce swelling of a muscle injury.

47. Make certain : ENSURE.   Why do we have this word, along with "assure" and "insure?"  They came into Old English from Norman French, so that's who I blame.

48. Lao-tzu's philosophy : TAOISM.   Meaning the way, path or principle.  Greatly simplified -- living in harmony with all that exists.

54. Considers : DEEMS.    Tracing back to an Old English root meaning to judge, the same as DOOM.

56. Klutzes : OAFS.   An OAF is a stupid, uncultured or clumsy person.  Strangely, the word traces back to the old Norse word for elf.   The original meaning was "elf's child" [I'm assuming changeling,] later "idiot child," later still, how we use it today.

60. Ball club : BAT.  In baseball, the ball is clubbed with the bat.   This example is from a couple years ago.  Miggy seems to have his stride back, and has done something similar a couple times in the last week.


There you have it, a wandering in space and time, including a couple excursions into the English of our past, a dystopian view of the far future, a dollop or so of French, and finally back to current reality with some down-to-earth baseball.  Despite my earlier criticle nits, a pretty nice journey. 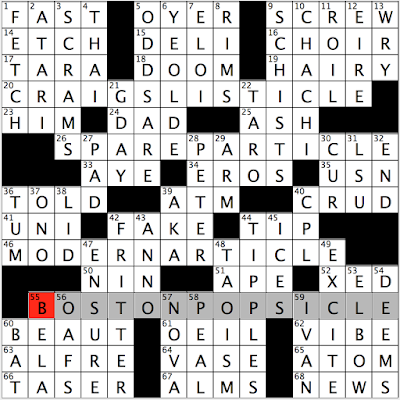 Email ThisBlogThis!Share to TwitterShare to FacebookShare to Pinterest
Labels: puz